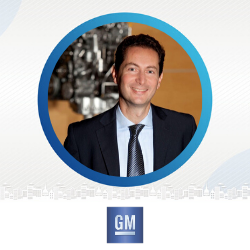 Gianmarco Boretto was born in 1973 in Torino (Italy). He received his university degree cum laude in Materials Engineering at Politecnico di Torino in 1997. Ing. Boretto began his professional career at Centro Ricerche Fiat in 1998, where he was involved in the development of advanced exhaust emission aftertreatment technologies for automotive applications, and he was coordinator of several national- and European-funded research projects. In 2003, he joined the Advanced Engineering organization of Fiat-GM Powertrain, and he was appointed technology leader for diesel aftertreatment and combustion. Since 2005, he works in General Motors. Ing. Boretto assumed the position as Chief Engineer and Program Manager for the Mid-size Diesel Engine family in 2008 and for the Large Diesel Engine family in 2015, with the responsibility for their global roll-out. In the current role of Director Diesel Engine Hardware Engineering, he oversees the team of more than 300 engineers working on the development of the current and future Diesel engines for General Motors, from advanced engineering to production release. He is author and co-author of more than 25 publications and patents.