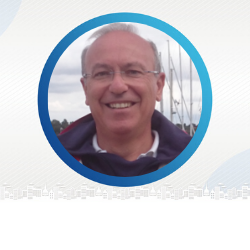 Pierpaolo Marchese is an independent ICT Consultant. He is currently in the ETSI (European Telecommunication Standard Institute) Board of Directors, for TIM SpA. In this framework he contributes to the long term strategy of ETSI and in related Industry 4.0 projects to disseminate Know-how on Standards.
His current interests include 5G Mobile Technologies, Virtualisation, Industry 4.0, Internet of Things, Automotive and ICT, Artificial Intelligence, Technology dissemination within SME.
From 1985 to 2018 he was part of TIM S.p.A Group with various team responsibilities and, from 1997 on, part of the company Management in Technology and R&D departments.

Since Nov 2016 to October 2018 he have been Managing Director for Standard Coordination and IPR Management in TIM Technology, Innovation, supervising TIM contribution to Technical Standards in over 30 Associations, the TIM R&D programs and technical contracts with about 10 National Universities, and the IPR and R&D financed TIM project portfolios (national bids, Horizon 2020). In IPR the team managed the lifecycle of over 3000 patents, including valorisation and licensing.

Before 2016, Pierpaolo Marchese graduated at Politecnico of Turin in 1985 in Electronic Engineering. In his initial experience in CSELT, the former R&D Centre of Telecom Italia, he worked as technical Project Leader in Intelligent Networks (IN), with the responsibility to test and deploy the first two generations of IN nodes in the TIM network. He was also responsible of the technical evaluation of Personal Communication Services provided by TIM using DECT and GSM. Since 1997 to 2016, he hold management responsibilities in Telecom Italia Laboratories as well as in Planning and Network Dept. to set up teams and launch innovation projects in the area of Mobile and Network Services, including the first TIM projects for the Italian Digital Agenda and IoT Business.