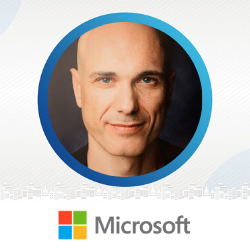 Fabio Moioli is the head of Microsoft Consulting & Services in Italy, where in these years he led a profound business transformation centered on Artificial Intelligence and Data-driven business models. Thanks to this, his team won for two consecutive years the EMEA Award for Digital Transformation and Microsoft Italy is today considered a worldwide AI center of excellence for Microsoft.

Before arriving in Microsoft, Fabio was Vice President at Capgemini, where he led Capgemini Digital and M2M. In addition, Fabio was part of Capgemini Global Experts on Artificial Intelligence and IoT. Previously, he was an Associate at McKinsey & Co, where he mainly worked on Business Digital Transformations. Fabio professional career started at Ericsson as Account Executive and as Project Manager for 16 different markets in three different continents.

Fabio has an Engineering Degree in Information Technology from Milan and a Telecommunications Engineering degree from Stockholm, as well as several professional certifications. He worked for several years in Scandinavia, North & Central Europe, Unites States and Canada.

He is part of the Singularity University Worldwide Faculty, as well as an Extended Faculty at MIP Politecnico di Milano, Harvard Business Review, and Luiss. He is a frequent speaker at business and technology conferences, where he addresses opportunities & challenges raised by Artificial Intelligence and exponential technologies, including societal and ethical perspectives