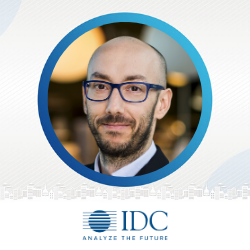 Massimiliano (Max) Claps is the research director in European IDC Government Insights team. His research empowers technology suppliers and professionals to embrace disruptive technologies including artificial intelligence, edge computing, and augmented and virtual reality, to realize the benefits of strategic initiatives such as smart cities, the future of mobility and citizen-centric government services.

Max Claps has almost 18 years of public sector experience. After starting his career as a management consultant, he joined IDC in 2002 as the lead analyst for the government, healthcare, and education industries in Europe. He then held various analyst and management roles at both Gartner and IDC. In those roles he advised technology suppliers and professionals in the public sector globally. Between 2017 and 2019, Max was the global lead for the SAP Future Cities program.

Claps holds a degree in international business from Bocconi University in Italy.