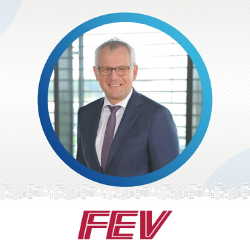 Professor Stefan Pischinger studied Mechanical Engineering at Aachen Technical University. From 1985 until 1989 he worked as a research assistant at the Sloan Automotive Laboratory at M.I.T. until he received his PhD for his work on Spark Ignition in modern combustion engines. From 1989 until 1997 he was in various positions at Daimler-Benz (today: Daimler) working on Diesel and Gasoline engine development. In his last position he was department leader advanced engineering Diesel engines and Project leader for the new Common Rail V8-Diesel engine. Since 1997 he is Professor at Aachen Technical University and Director of the Institute for Combustion Engines. At the same time he is President and Chief Executive Officer of the FEV Group, a worldwide leading Company for Engineering Services and Test Systems in the field of Combustion Engines and Powertrain. Since 2010 he is member of the North Rhine-Westphalian Academy of Sciences, Humanities and Arts.