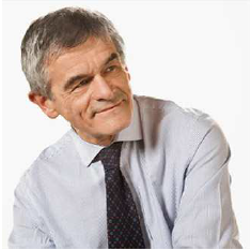 Born in Moncalieri, next to Turin, on 1st September 1948, he comes from a working-class background. After taking a diploma in accounting, he graduated in political science with top honours at Turin University.

In 1974 he completed state military service in the artillery with the Alpini, the mountain corps of the Italian army. He entered upon a career at university and in politics remaining at the same time in close contact with the region and its social and economic concerns. While a researcher at Turin University he coordinated economic planning for Piemonte Region from 1975 to 1980. During the same period he served as a councillor in Moncalieri City council .

Between 1985 and 1987 he acquired international experience as a permanent official at the European Parliament. After returning to Piemonte he became a leader of the CGIL trade union where he built up an indepth knowledge of the dynamics of the labour market.

In 1991 he became secretary of the PDS (Democratic Party of the Left), a position he held first at provincial and then at regional level until 1996 when he was elected to the Italian Parliament as a member of the Chamber of Deputies. His first term as Mayor of Turin began in 2001, and after re-election in 2006 he remained in office until May 2011.

From 2009 to 2011 he was also president of ANCI (National Association of Italian Municipalities). From May 2012 to February 2014 he was chair of the banking Foundation “Compagnia di San Paolo”, a position he resigned from in order to stand as presidential candidate for Piemonte Region. As representative of the centre-left coalition in the administrative elections on 25th May 2014, he was elected President of Regione Piemonte with over 47% of the total vote.

Since July 2014 up to December 2015 he was the President of the Conference of Italian Regions and Autonomous Provinces. He has been elected President of the Assembly of European Wine Regions in April 2015.