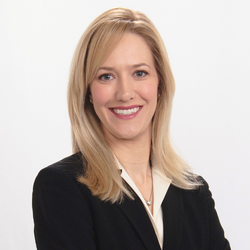 Ingrid Tighe is the Director of Economic Development for Oakland County, Michigan, a county that comprises more than 20% of Michigan's overall GDP. In her role, Ingrid leads 185 people in four divisions that conduct business development and international business attraction; community development and planning; workforce development and six job centers; and veteran services. Prior to working at Oakland County, Ingrid served as the Executive Director of downtown Birmingham, Michigan. She also worked for the State of Michigan in economic development promoting business investment and job growth in Michigan working with the private sector, local economic developers, and government organizations and in workforce development implementing programs, policy, and statewide initiatives to improve veteran employment.
Ingrid attended Vanderbilt University on a four-year R.O.T.C. scholarship and was commissioned as a U.S. Army Signal Corps officer upon graduation. She served from 1998 to 2005 with the 1st Infantry Division in Germany participating in NATO peacekeeping operations in Macedonia and Kosovo and later with the 1st Cavalry Division leading troops in 2004 to 2005 in the combat zone of Baghdad, Iraq. After honorably separating from the Army, Ingrid used the post 9/11 G.I. Bill to obtain her Master of Public Administration from the Gerald R. Ford School of Public Policy at the University of Michigan.