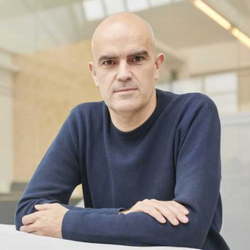 Born in Kortrijk (Belgium) on May 9, 1974, Lowie Vermeersch grew up in the Flanders and is part of the 3rd generation of a prominent artistic family.
In 1992 he started his studies in Industrial Design Engineering at the Technical University of Delft where he graduated in 1998 as “Master of Science in Industrial Design Engineering” with first class honours.
Immediately after his graduation he joined Pininfarina, where he contributed to the design of many successful cars and prototypes.
In July 2005 he was promoted to the role of Chief Designer leading one of the three Pininfarina design teams and in 2007 became Design Director of Pininfarina. As Design Director he led all the Pininfarina automotive design activities.
In October 2010 the Belgian TV Canvas dedicated a documentary to his story and professional achievements. CAR Magazine ranked him nr. 12 in the list of ‘ Worlds 25 Most Influential Car Designers’ and he won the Prestiguous ‘Compasso d’Oro’ award for his design of the Pininfarina Nido.
In 2011 he resigned from his position to found Granstudio in Turin to expand his experience in automotive design into the broader field of mobility.
Today Granstudio is an internationally recognised mobility design studio with a team of 60 designers, engineers and mobility experts that works on a wide variety of mobility projects. These projects include the design of cars such as the Dallara Stradale and Lightyear One, as well as the design of mobility services and designing urban mobility plans. This diversity of projects is united by Lowie’s vision that all design should focus on creating the right synergy between human desires and contextual needs.
He is a regular speaker and lecturer and co-teaches on the role of mobility at the University of Vienna.