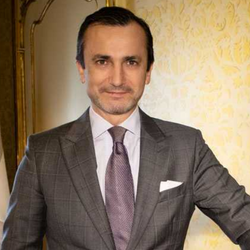 Dario Gallina was born on 5th June 1966 in Torino, he is married with 3 children.
After obtaining a Master’s degree in Economics, he became CEO of “Dottor Gallina s.r.l.”, a family-owned company specialized in the production of polycarbonate sheets for construction and automotive industry applications. “Dottor Gallina s.r.l.” is today a leading company in Italy, also positioned among the major players of the polycarbonate industry international market, with branches in Greece, USA, Turkey, Germany and India.
From 2007 he is member of the General Council of the National Federation of Rubber and Plastics. From 2012 to 2014 he has also been member of EUPC (European Plastic Converters) Steering Committee.
In the framework of Torino Institutional network, from 2004 to 2007 Mr. Gallina was Vicepresident of the Employers’ Association of Turin Young Entrepreneurs Group, and from 2014 to 2016 he became President of the Small Industries Group. In 2016 he was elected President of the Employer’s Association of Torino (Unione Industriale di Torino) and Member of the Steering Committee of Confindustria (the National Employer’s Federation).
In March 2020 Dario Gallina has been elected President of the Torino Chamber of commerce and Industry, in June 2020 he has become Vice-President of the Union of Chambers of commerce of Piedmont (Unioncamere Piemonte) and from september 2021 he has become Member of the Executive Board of the National Union of Chambers of commerce (Unioncamere Italiana).
At international level, in July 2020 Mr. Gallina has been nominated member of the ICC Executive Board – International Chamber of commerce –, and member of the ICC International Netcom Committee.