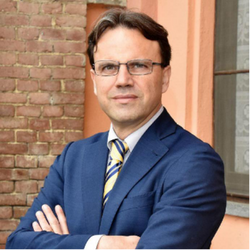 Mr. Andrea Tronzano, 52 years old, from Turin.
Expert in commercial communication and business development projects. He was city councilor in Turin for ten years and regional Minister until 2019.
Graduated in Accounting and subsequently graduated from university degree at the Higher Institute of Physical Education in Turin. Freelance. Until April 2018 collaborator with the role of CBDO at a private company in the Turin area.
Active in politics since 1990. Municipal councilor in San Gillio from 1990 to 1999, in Novalesa from 1999 to 2003, in Turin from 2006 to 2016. From February 2003 to June 2006 he was part of the staff of the General Manager of Arpa Piemonte. He was deputy vice president and president of the Sport Commission of Anci Piemonte.
On 10th April 2018 he was proclaimed regional Minister, taking over from councilor Daniela Ruffino. In the 10th legislature he held the position of president of the Committee for the quality of standardization and the evaluation of policies and vice-president of the III Commission (Productive Activities).
Since 2019 is Minister for Budget, Finance, Economic-financial planning, Heritage, Development of productive activities and small and medium-sized enterprises (Industry, Crafts, Cooperative enterprises, Mining activities).